Russia …
an exploration through history & culture
(two lectures given separately)

An afternoon’s walk in the country, you come upon the typical village country church. This lecture will help you look at the architecture inside and out, the church furniture, those mysterious nooks and crannies, high and low. How and why did it all come to look this way? This is a fascinating journey through English history unravelled before your eyes. “I can’t make you experts” says Nicholas Henderson, “but I can teach you enough to amaze your friends on that afternoon in the countryside.”

Four lectures delivered
as individual lectures
or as a Study Day

The Powers behind and on the Throne
… ten Tudor Queens

Elizabeth of York, Catherine of Aragon, Anne Boleyn, Jane Seymour, Anne of Cleves, Catherine Howard, Catherine Parr, Lady Jane Grey, Mary, Elizabeth. Deadlier than the male, powers behind and on the throne, formative figures in a tumultuous era whose various influences are with us to this day. Click for synopsis below: 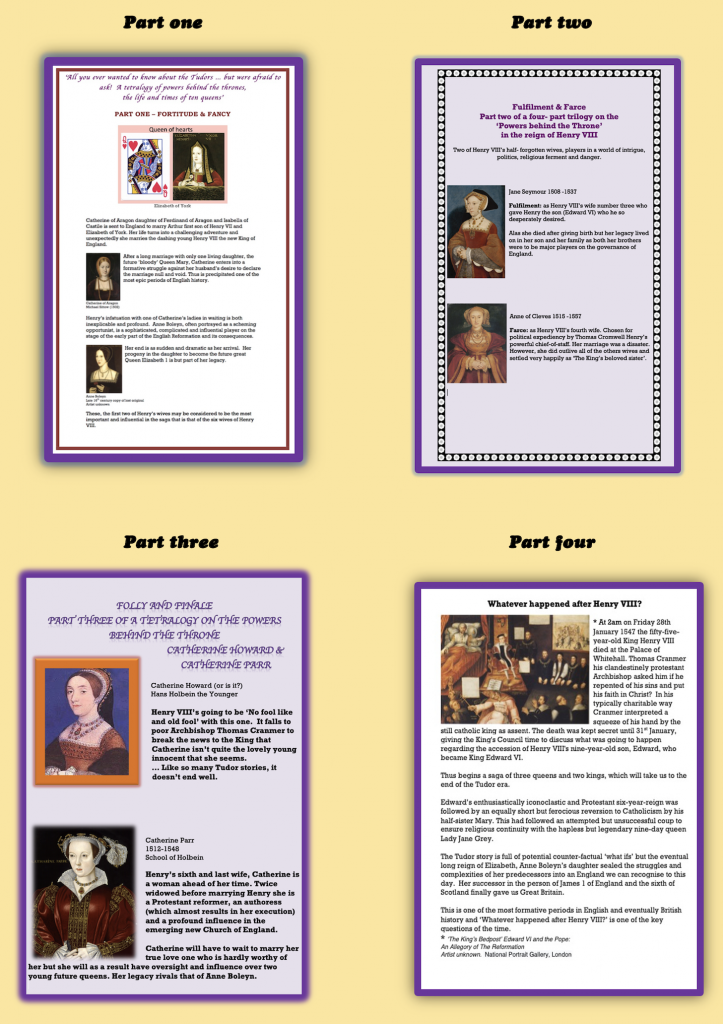 ANNE OF CLEVES – ENGLAND’S HALF-FORGOTTEN QUEEN
Part two of part two of a Tetralogy,
a four part series available one part at a time or as a Study Day

Talks may be customised to suit your requirements including bespoke talks.
They are illustrated by Keynote (Power Point) projection and sound
I am also able to deliver lectures online using Zoom or similar platforms.

For more information, please get in touch using the  Contact  form.

And did those feet in ancient time
Walk upon England’s mountains green:
And was the holy Lamb of God,
On England’s pleasant pastures seen!
Words: William Blake 1808 Music: Sir Charles Hubert H. Parry 1916

Canute, to William the Conqueror, to the Tudors and everything in between.
The Anglo-Saxons and the Normans – gave us an enduring legacy,
but so did the Danes and  the Church.
An often forgotten and mysterious period in what was to become …
‘English’ history.
The legacy lingers on visibly and even audibly in architecture, linguistics
and society.
An exploration into the great upheavals in society and community that disrupted and formed the cultural feeds into what was to become England and eventually Great Britain.

ICONOCLASM …
a study in constructive destruction

The destruction of of perceived idols in religion, architecture and society is a surprisingly frequent phenomenon in history, which has shaped and formed society – sometimes for the better.